The present turmoil fired up by Vladimir Putin’s new International doctrine (The FU Doctrine) has been developed under several core problems faced within USSR…sorry, Russia. 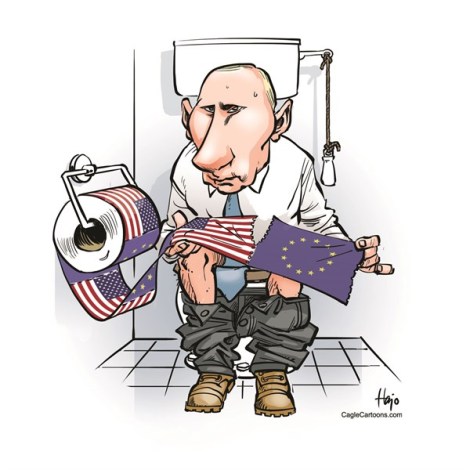 THE FU POLITICS – A New International Political Doctrine by Russia

Over the past 20 years, trillions of USD were generated via a massive oil and gas production within Russia and mainly sold to western European countries. The result of such was an impressive and unprecedented cash flow for the Russian Treasury. In a newly pseudo kind of democracy and unknown market economy the management of such financial inflow was paramount and case sensitive at all levels.

With extreme debilitated primary infrastructures left to abandon for decades, part of such results were diverged to modernize a decadent country. A second priority was the raise a social peace via some new core investments. A huge concern was the deteriorating army conditions. From the Pacific to the Northern Fleets, all former USSR army branches where left bankrupted without money. The concern to stabilize the army was at the core of a new country. Finally, the private sector was due to take also its share on the gains. Such happened naturally. Here started the problem.

Several key companies and individuals never believed of a long and enduring democracy in Russia. From day one since 1989, these entities started to expatriate their funds to Paris, London, Luxembourg, Andorra, Malta or Dubai. Further then expatriate, some of key oil and gas contracts were signed and paid outside Russia. This situation promoted an ongoing loss of cash flow. Some arrests were made upon the newly endorsed President Vladimir Putin era. The arrest of the former oil company Yukos President was one of the most visible.

These facts take us to the present day. Russia has a serious and severe liquidity problem. Such took the Russian State over the last years to sell some strategic positions in oil consortiums in the Middle East and North of Africa. To add to this energetic influence loss, the new pipelines coming from the Caspian Sea via Turkey to Europe and the newly controlled Libya energetic sector started to virtually reduced Moscow influence over Europe and not to mention a 0% influence within Middle East countries including Iran that embraced a new sound agreement with US and the EU within the Davos Conference last year.

Russia has been losing its pivotal role under Putin’s legacy. Massive democratic deficit and all dictatorship tics had produced negative reactions over the last decade. It is not innocent the steps taken by the European Union over the last years to find energetic alternatives to Russian gas dependence and also to extend EU’s political & economic influence in Easter Europe and Euro Asia Countries. The European Union can offer assets that do not exist in Russia: a 500 million consumers market, single currency and money. Russia does not have anything to offer.

Ukraine was just the beginning of a desperate strategy. It wasn’t the Ukrainians that started the unrest in Kiev. Russia did it knowing the desperation of a whole country. Putin throw the first rock. The rest was a natural spill over. It was easy to fire up Ukraine and a kid’s play to annex Crimea.

Internationally isolated. Not even Beijing will be there this time.

Putin’s only strategy it’s to promote war games and unleash the dogs of war. But, we live in a different World from the one he was born. The rest of the world it’s different and the Russians are different. I do not foresee in the long term success for Putin’s desperation strategy. Old partners like Beijing and Tehran will opt for silence this time. They know that what Putin can offer it is a hand full of nothing and another full of problems.